“In addition to being one of our outstanding ARCS scholars, we were especially impressed by Kelsey’s demonstrated leadership in outreach, teaching, and mentoring to women and under-represented minorities,” said Chapter President Amy Rudolf. 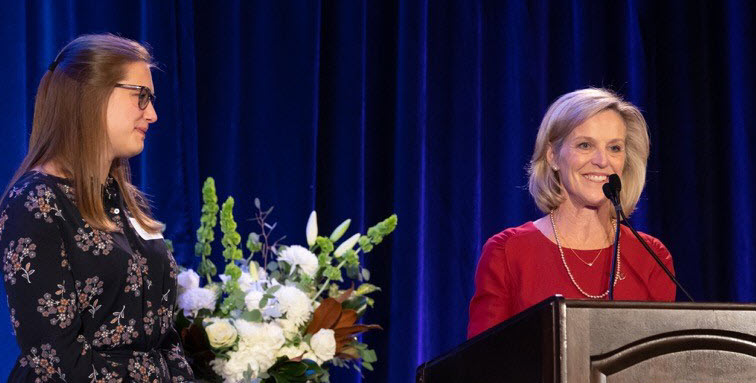 “It is a huge honor to be the first recipient of this award,” said Grinde. “Mentoring, outreach, and teaching are all very important to me, but I think the focus for us as grad students is usually on academics and research; so, it really means a lot to be recognized for these efforts.”

Grinde has found support and inspiration through her involvement with the ARCS community. “Seeing people who have achieved so much success in their own professional lives and who continue to prioritize donating their time, money, etc., to support grad students in Washington is a great reminder that people in our community care about the work we're doing and that it's important for us as students to get involved in our communities as well,” said Grinde.

Since receiving the award, Grinde has learned more about Simpson and discovered that, like Grinde, Simpson majored in math in college. She also learned that Simpson had a sense of adventure which Grinde admires; at the age of 80, Simpson became the oldest woman to experience zero gravity.  But the strongest connection between the two women lies in their dedication to leadership and service.

“Kelsey is an outstanding student and it is exciting to see that her leadership excellence is recognized not only within our department, but also externally by ARCS with the Dorothy Simpson Leadership award. Without doubt, Kelsey is poised to make significant contributions to our field and inspire other students to also become leaders,” said Lurdes Inoue, graduate program director and professor of biostatistics.

Earlier this year, Grinde received the Gertrude Cox Scholarship from the American Statistical Association (ASA) and was honored with an Excellence in Teaching Award by the Department of Biostatistics. She’s a past recipient of a National Science Foundation Graduate Research Fellowship and earned the department's Donovan J. Thompson Award in 2016, an honor that recognizes the best combined performance on the PhD applied and theory qualfying exams.